2012: The Year of Credit Changes, Scandals 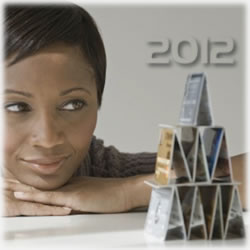 We’re gearing up to close out 2012, but before we do, we thought we’d take a look back at 2012 to see just how far we’ve come, what kind of promised changes came full circle and ideally, get a better idea on what we can expect in 2012. In this week’s post, we explore the first three months of 2012. Remember those? Keep reading –

In late January, Capital One announced the Federal Reserve had approved its request to acquire ING Direct. When that happened, it immediately rose to become the fifth largest American bank – and it’s really close to becoming the fourth largest credit card issuer. This, said the spokesperson, was to continue its efforts of becoming a bank for everyone – those with excellent credit and those who might be struggling to pick up the pieces.

What made this acquisition so important, though, was its proximity to the 2010 Dodd Frank law and the fact it was an election year. Remember, had Mitt Romney won the presidency, we’d be writing about very different things today, mostly, informing our readers on what to expect once he overturned this important consumer law – and he’d already stated that would be one of his first goals. Instead, President Obama was re-elected, which made this acquisition that much more important in the eyes of the credit card giant. You may recall hearing at the time that this was the largest since the new laws went into effect.

Capital One had a tough go at it, too. Consumers were concerned and were worried that the card company’s complaints wouldn’t be made public. Public comment periods are required in these types of deals and many had their reasons as to why the deal should not be approved. Everything from refusing to comply with fair lending laws to the bank’s refusal to budge on its minimum credit score requirements for FHA backed loans were all part of the package. After the acquisition, the bank announced it would be reconstructing its approval process. Turns out, it was a win-win all the way around.

In February, the Consumer Financial Protection Bureau announced it would be investigating credit card arbitration clauses. The Supreme Court was just off its ruling that these contractual additions would stand and as a result, if consumers wanted loans or credit cards, they would have no choice but to agree to the clauses that said mediators, and not courts, would work out differences when they popped up. It also eliminates the possibility of a consumer suing a credit card company for any reason at all. Advocacy groups were more than slightly upset and said these clauses were not enforceable. The Court ruled in an 8 to 1 decision that they were indeed enforceable.

At that time, Michael Calhoun, President of the Center for Responsible Lending, says,

These arbitration clauses have become a ‘get out of jail free’ card.

Indeed they have. Soon, though, a beacon of light shown through. The Consumer Financial Protection Bureau announced it might have found a way to work around those clauses or at least give the courts something else to think about. After it began receiving complaints, it decided to take a closer look at the arbitration clauses in an effort to find a new “happy medium”, so to speak. In fact, some say the only middle road is to eliminate the clauses completely and allow disputes to be heard in a proper legal setting – one where no bias exists. This could effect not only the credit card industry, but the financial sector as a whole.

Currently, the agency is still looking at the clauses and based on its past efforts, it won’t be long before we begin hearing about what – if anything – the powerful bureau will be able to do.

March seems like a lifetime ago. We were writing about the growing number of hacks being made into various databases and the millions of consumers whose identities and credit histories were compromised. Zappos was the target in early March when it disclosed hackers had successfully stolen private and identifiable information of 24 million of its credit card customers. You may recall that Zappos is part of the Amazon family. The problem was uncovered in mid-January and it immediately began its own internal investigation. It soon realized it was as bad as it hoped it wasn’t and was forced to email its customers and tell the tale.

It found itself the target of a cyber attack that gained access to its internal network. In the email, it reiterated that there were no complete credit card numbers accessed. It didn’t store the entire numbers in a way that any hacker could bypass. It did, however, tell customers that names, email addresses, phone numbers and even the last four digits of social security numbers were stolen. Even the so-called “encrypted” passwords were gained. The email stressed that its team was working around the clock and had already reset the passwords on the accounts. The email directed the customers to set a new password and frankly, it went out of its way to fix any problems customers had.

And that’s really at the heart of things – there are no legitimate companies that are doing business online and that aren’t also meeting every security level it possibly can. These hackers just happen to be as advanced as those fighting “the good fight”. Zappos is a perfect example of a company first, having the security measures in place that let it know there was a problem (versus thousands of customers discovering the problem on their own) and then had the ability to put temporary precautions in place while it assisted those customers in securing their accounts again.

Also in March, Visa had its own announcement – and it was one customers weren’t thrilled about. The biggest credit card network in the world made changes to its terms and conditions. Citing the Durbin Amendment as its reasons, it said it had to offset losses the new financial laws presented. Its solution was a host of new network participation fees for both debit and credit cards. This was just another new reality for consumers who’d already begun seeing their free checking accounts fading into the sunset as well as big changes in their terms and conditions associated with their credit cards.

Many consumers, up until that point, were unaware that debit cards were especially targeted during the financial reform. It soon became clear though when the networks began raising and changing their fee structures. Visa was careful, though. It knew it had to walk a fine line. While it raised fees, it also hoped for some kind of compromise that would keep consumers happy enough to keep reaching for their Visas instead of a competitor’s card.