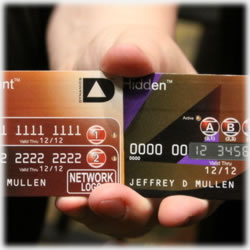 - CitiBank and its 2.0 Card
- You're So Square
- Just Google
- Facebook Set to Music

Just when you think credit card technology has gone as far as it can, here come new advances that are poised to knock your socks off. From impressive iPhone apps to Google’s latest massive quest, get ready for a new level of convenience and impressive technological advances.

CitiBank and its 2.0 Card

LED display, built-in buttons and brand new encryption all come together on one standard size credit card, courtesy of CitiBank. While the facelift is exciting, it’s what this magical credit card can do that has the financial sector as a whole watching closely. The bank is hoping the ability to link every checking account, savings account and credit card you own into its new card offering will draw you in for a lifetime.

There’s more, though. Most of us can relate to the frustration of redeeming our rewards points, but what if you could use them as currency to pay for groceries, buy this season’s latest handbags or pay your utility bills at traditional retailers and other businesses? Redefines “rewards,” doesn’t it? This will be the first time a credit card will be able to do this at the point of sale (although online shoppers can usually pay for electronic purchases with their rewards points). There’s still more.

If your credit card’s been stolen or if the information is compromised, you can quickly deactivate the credit card remotely. Technology being used even allows you to “rewrite” the magnetic strip so that it can’t be used. The Card 2.0 should be available for consumers sometime this year.

This little gem is a one inch by one inch square box that plugs into a smart phone, such as Droid or the iPhone and turns it into a credit card swiper. This is perfect for mall kiosks or food courts outside your office. Now, businesses that previously couldn’t or wouldn’t accept credit cards or debit cards can now do so easily and safely. Merchants who are already using this piece of technology say it’s cost-efficient since there are no leasing or rental fees for bigger, bulkier equipment.

The Square can be purchased without breaking the bank. You can add a tip and even sign the receipt via the merchant’s smart phone. No worries about safety since Square uses state of the art encryption technology. Your information is not stored on the merchant’s equipment.

Google is nearing its big announcement that it’s teamed with MasterCard. This new mobile payment system will allow you to use your phone to transmit the information that’s usually accomplished with your plastic. A few of the familiar names that have already signed up include Subway, Macy’s and American Eagle Outfitters. When the announcement is made in late May, it’s expected New York City will be the testing field. If it’s successful, look for it to take off around the nation within a few months. Asia has already successfully incorporated this new technology.

Aside from the seemingly impossible-to-develop “Dislike” button, Facebook users want to update their statuses to the beat of their favorite songs. Facebook announced it has partnered with Spotify, a music streaming service. While it’s not sure how much, if anything, this service will cost, users will be able to pay any fees with credits, purchased with your credit card.

The app will run in the background and it’s believed a digital library of more than one million songs will be made available. Not only that, but friends will be able to listen simultaneously with one another. This announcement works in tandem with the news that Warner Brothers will be making its movies available for streaming on Facebook. The movie rentals will also be covered using Facebook credits, which you’ll purchase with your debit or credit card.

As you can see, there’s a lot to look forward to in the credit card technology sector. With as much an emphasis on security as the offerings, you can use any of these new services and products knowing it’s never been safer. You can be sure this is just the tip of the iceberg. Look for these new options to continue to evolve.