Another Kick for the Unbanked 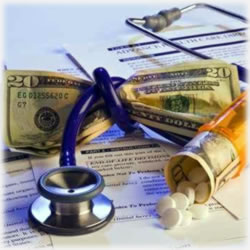 Those who are unbanked or underbanked just got another kick in the teeth. If you’re looking to purchase healthcare insurance, especially ahead of ObamaCare going into full force, you might have experienced more than a few frustrating phone calls. That’s because most health care policies require a credit card for the first payment and then payments after that will require a monthly EBT (electronic balance transfer) or check.

In fact, some providers won’t accept even money orders. And make no mistake: this is shaping up to be especially problematic since there are millions of Americans who are now unbanked. According to the FDIC, its latest survey reveals more than 8 percent of Americans are unbanked – up from 2009 and indicative of more than 10 million people. Further complicating matters are the underbanked – a whopping 20 percent of Americans don’t have adequate banking relationships. Just to provide a bit of contrast, consider this: nearly 30 percent (yes – THIRTY PERCENT) of Americans don’t have savings accounts.

But there’s another interesting number that factors into this dynamic: 51 million adults rely not only their banks, but check cashing stores, which suggests many are either behind on loans they have with their banks or are overdrawn and can’t go to the bank where their accounts because they would likely be required to use funds out of a check they’re cashing to cover their overdraft. It’s not ideal, of course, but the truth is – many can relate to that double edged sword.

This, of course, is bound to pose problems for the Obama Administration – especially come early 2014 when the healthcare plans officially go into effect.

Odds are, if a consumer has no health care insurance, odds are good that he may be un or underbanked too. In some ways, it’s a double whammy. The insurance companies, so far anyway, don’t seem too concerned: they’re more interested in gaining all the consumers they can easily manage and then, and only then, they will focus on their own respective game plans for accommodating those who have no easy way of exchanging payments for services.

The new federal health laws require the vast majority of Americans to carry health insurance beginning January 1, 2013. Because insurance policies are being marketed in a number of ways, including online, there must be new options provided that will help Americans remain in compliance with the new laws. Of course, the traditional options won’t work for the unbankables who are shopping and ready to purchase health coverage with federal subsidies through online insurance marketplaces. Dan Schuyler, a director at Leavitt Partners, a firm that is advising private insurers and states on how to comply with the law explains it this way,

You don’t want to take these millions of unbankable people through the entire enrollment process and then at the end of line say, ‘OK, the only way you can pay for your share of the premium is with a bank account number,’

This is truly becoming quite the growing problem. If you’re not carrying healthcare insurance, you’re breaking the law and could be hit with a penalty as well as liability for medical bills (which, interestingly enough – isn’t that the way it’s supposed to be? Taking responsibility?)

Unbanked for Many Reasons

While some consumers would certainly enter into a new relationship with a bank, there are those who want nothing to do with a bank of any kind for any number of reasons. Researchers who study consumer financial behavior say new immigrants may have shied away from the banking systems in their own countries and as a result, they’re simply extending that distrust. For those of modest means, a single math error that results in overdrafts and fees charged by traditional banks can upend the financial balance in their household.

The bank account is extremely stressful when you don’t have a job that’s reliable,

She said her employer doesn’t offer health insurance and when she tried to apply on her own, she was declined. Then, when she changed jobs, Bank of America began penalizing her for no longer using direct deposit. She was forced to pay $12 a month for a service she no longer used and could no longer use because it wasn’t offered from a new employer.

While we’ve been watching and reporting on this dynamic for months, there are some who are just now realizing the potential repercussions.

I think there is a dawning awareness that this is a large problem,

says Brian Haile, senior vice president for health policy at Jackson Hewitt Tax Service. He knows all too well the problems being unbanked or underbanked pose. He said in his own state of Tennessee, and in his role as director of the Insurance Exchange Planning Initiative, he spent considerable amounts of time trying to raise the issues with state government. He said he received no response.

Neither the Affordable Care Act, nor any other federal health laws for that matter, require health insurers to accept all forms of payment, such as credit cards or prepaid debit cards that many consumers use instead of a bank. And now, federal officials are walking on eggshells because they don’t want to discourage even more insurance companies from bailing on the new healthcare plans. Already, countless companies have complained on both state and federal levels about the legalities of being forced to sell products that might not be in the best interest of their profits and officers.

Fortunately, it appears there are some insurance companies that are beginning to resign themselves to the inevitable and as a result, are working to find options that everyone can manage. Blue Cross and Blue Shield is one of those companies that say it’s now “evaluating expanded payment options”. It could be that prepaid debit cards will be allowed or electronic fund withdrawals from non-traditional funding sources like PayPal. It’s not clear how far along in the process this company is and it’s also being reported that other insurers, such as Cigna and UnitedHealthcare, are in talks with various state officials to ensure they too are in compliance and that no one gets left behind due to too-strict payment policies.

This past April, federal health officials issued a letter stating that all health plans selling coverage in the federally run insurance marketplaces in 28 states will have to accept payments in ways that don’t discriminate against their customers, but didn’t prescribe what those payments should be. Understandably, this is complicating matters even further for some.

For those who are under or unbanked, a solid prepaid debit card just might be the right solution. Fortunately, there are more than a few fine choices on the market today; ones that aren’t as invasive with fee structures, either. American Express now offers a couple of prepaid products, including Serve and its new product with WalMart, BlueBird. Already, prepaid products have become a preferred method for millions of American consumers who are fed up with their banks and seemingly increasing fees on a weekly basis. The fact that Bank of America charges $12 a month for someone who no longer can take advantage of direct deposit speaks volumes about the way banks continue to see consumers – even after all of the scandals and embarrassing decisions of recent years.