Can We Live Without a Credit Card? 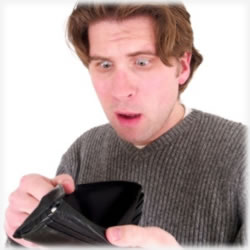 In today’s society, is it realistic to believe we can survive without the benefits of a credit card? With so much wrapped into credit, it’s a difficult question, but one we sought out to better understand.

Many Americans are making the commitment to live debt free. Many have succeeded in paying off all of their debt and a growing number of consumers are working towards that financial goal. Others are living debt free due to bankruptcy and instead of rebuilding their credit, instead are looking for ways to cover their expenses without credit cards, mortgages or auto loans. If you’re wondering if they can get by without these financial products, you might be surprised to learn that many are doing just fine.

Others, though, are learning it’s not realistic. There’s a growing number of merchants who no longer accept cash. Usually, though, it’s companies such as airlines that are saying ‘no thanks’ to cash. In fact, to book a flight with any airline, you need a credit card and if you’re going to make any in-flight purchases, the only currency accepted are credit cards. Just as you can only secure an airline reservation with a credit card, you can only book rental cars and hotels with credit cards, too. The reason being if you cause damage to the rental car or go a bit crazy with room service, the companies want to be sure they can recoup their losses should you bail in the middle of the night or drop the rental car off after business hours. Indeed, not only must you have a credit card, you must also have enough available credit to sustain a “hold”. This is a temporary freeze on several hundred dollars of your available credit that falls off after a certain amount of time, usually a few days after you’ve checked out of the hotel or returned the rental car. Some companies (and you’ll have to shop around) allow for a debit card, but again, the checking account or the prepaid account must have several hundred dollars that you can allow to be frozen for a period of time.

And then there’s the washing machine. Or car. Or house. Few Americans can afford to pay cash for a new car and even fewer can pay cash for a house (in fact – can anyone afford to plop down hundreds of thousands for a house?). Many consumers can easily cover a few hundred dollars for a new appliance like a washing machine or refrigerator, but more times than not, those purchases require some kind of credit agreement. For those whose credit is in tact, they will sometimes turn to a credit card; for those who do not qualify for whatever reasons, either by choice or a less than perfect credit score, they will often turn to their local rent to own establishment. These are historically higher priced options.

For many though, it’s their only option. Even those who have committed to avoiding credit cards will sometimes find themselves unprepared for the replacement costs associated with their clothes dryer or hot water heater. For those determined that no credit accounts will darken their doorways, they turn to the want ads for a good, reliable used appliance. It comes down to how determined you are to avoid a credit card. What surprised us was the number of consumers who were willing to open a new credit card account to cover the purchase, and as one woman we spoke to said,

I’d rather have eaten nails, but I had to replace the washing machine, which meant the hard decision had to be made,

and once the balance was paid, they simply closed the account. When we asked if they were concerned about the hit their credit scores would take, the answer was simple,

Nah. We are no longer basing our lives on our credit scores.

So why, aside from what we’re sure is the best sleep ever, would anyone want to live without a credit card? That, too, was an easy answer for those we asked. Many told us that they’d been victims of credit card fraud in the past. Despite the efforts made by their banks and card networks, it was still quite stressful. Even after the fraud had been handled, they reported they still lied awake at nights, worried about whether or not it could happen again. The absence of credit cards ensured that never happened again.

They also said not worrying about how much money they were paying a bank simply to use the card was another great incentive and still others report the peace that comes with not owing anyone a single dime. They also included reasons such as worrying about whether their payments would be credited on time, no fears about APR increases, no worries about spending temptations, how they’re going to make the payments if they lose their jobs and the fact they’re now spending on grandkids or saving for the little ones’ college educations.

Living without a credit card means they had to prepare for even a quick trip to the grocery store. They either had to ensure they had enough cash with them or for those who did opt to keep their debit cards, they had to ensure enough was in the bank to cover their purchases. To that end, we heard a lot of, “You’d be surprised at how well your bank balance does when you’re not paying out a lot of credit card interest” and once consumer even explained to us that before, she was already making sure she didn’t overspend at the grocery store and that now, she no longer worried about it.

Crazy as it sounds, I used to walk through the canned goods praying that the credit card payment wasn’t deducted before I could check out because I only had enough money for one or the other. It was easier to bounce the check with the credit card company that find out my debit card was declined in the supermarket.

She said she no longer keeps a running total in her mind since she knows exactly what’s in the bank and she doesn’t have to worry about when the $150 credit card payment is coming out.

Because most of the consumers today aren’t starting out with no credit history, and in fact, they’ve already purchased their homes and have built their careers, the worries about qualifying for a new house weren’t as relevant than when they were in their mid-20s and deciding on those big life choices. Most were in their late thirties or early forties and most had already seen the struggles that come with responsible credit. They all agreed that credit has a place in society, but that they weren’t at a place in their lives where it was as strong a need as perhaps their younger counterparts felt. Most said they were looking to improve their retirement funds than impress the neighbors with a new car every couple of years. They were past the materialistic stages of their lives. One woman explained,

And peace of mind is the one common denominator for all of those who have opted to take control of their finances versus it controlling them.