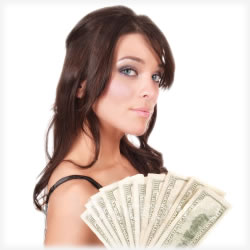 This month, my friend Sheena had to close out her credit card account. While monitoring her monthly statement, she realized someone else had been making charges using her card. Being it was the only credit card she had at the time, and not having a check book, Sheena was left with no payment option except for cash. The credit card company sent her out a new card within the week, so the situation didn’t affect her too badly. I, on the other hand, had an idea: I’ve decided to see what happens if I only use cash for one month.

For some people, only paying with cash wouldn’t be a major life change. For me, however, it’s virtually unheard of. I enjoy walking into a store, grabbing my items, swiping my plastic, and getting out of there in a timely manner. Paying with credit makes me less aware of how much I’m spending, though. (That is, until I go through my receipts later on!)

I didn’t do a whole lot better when I used to only use cash, either. Although, when paying with cash, things I buy seem like they’re more expensive. It tends to hinder my spending habits somewhat, but I’m starting to wonder if this little experiment is going to have me bankrupt before I hit the end of the month!

I decided to take an online vote to see what people visiting my site thought about this idea. Most of the visitors said they agreed with it, but a small percentage said they didn’t think giving up credit cards would help any. An ever lesser amount of voters didn’t care either way, but still voted.

A company executive made the comment that he loves his charge cards because of the airline miles he earns each time he charges something. “It also benefits me at tax time for calculating business expenses,” he added. He’s no fool when it comes to credit, though. This same man stated that he takes the money he charges out of his checking account right away and sits it aside to cover his balance. By paying off his credit card a few days before it’s due, his FICO report shows limited use of credit.

Janessa, another website viewer, had another reason for not wanting to give up her credit cards. “I’m just not good at watching how much I spend,” she said, “and this way, I have an online report from the creditors showing how much I’ve spent and where I spent it. I also like the fact that it tracks my withdraws from ATM machines.” She has a good point, but one has to realize that watching your credit score and card usage takes just as much effort and time as balancing a check book.

Ryan, a pilot for the military, had the opposite opinion. He said he favored using cash only to pay for everything he bought. When using cash only, Ryan discovered he could stay well under his monthly budget. He told me that he writes out a plan for his entire paycheck, down to every single penny. After the budget is wrote out, he withdraws the cash he’s going to use from his account. He then divides the cash into envelopes, labeling each one with its intended purpose. Every bill and expense has its own envelope, including one for “unforeseen expenses,” that can be used as needed. Ryan does this once a month, and says it’s worked out to his benefit.

As I get prepare to start my journey into the wonderful world of cash, I do have a few fears. I don’t want to have to worry about my cash getting stolen from me, I’m not looking forward to reaching into my purse and finding that I don’t have the complete amount to cover a purchase, and I can’t think of a single way that I’m going to be able to shop online anymore. On the bright side, identity theft isn’t a risk if ‘’m paying for things with cash only. My college loan as well as my furniture loan will continue to come directly from my checking account. I don’t think this will be a problem, because I haven’t paid with credit for those items.

I’m almost ready to get started, but I’ve made a list of things to do to help myself out:

– Get my credit cards out of my reach.
– Find an amount that seems reasonable to use as my budget for this month.
– Go to the bank and withdraw that amount in cash.
– Carry no more than $150 on me, just to be on the safe side.
– Begin shopping!