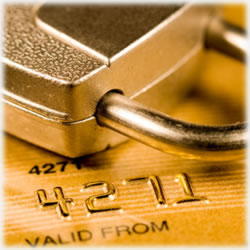 A decade or so ago, many consumers were just getting introduced to terms like “identity theft,” “fraud prevention” and other similar phrases associated with their credit card carriers. Sure, security’s always a big deal when it comes to keeping our financial information safe, but when cyber criminals began popping up on a seemingly weekly basis, many of us began rethinking financial security. This week, an annual study was released by a New York consulting firm that might have you checking with your credit card company to be sure their proverbial bases are covered. Take a look –

Javelin Strategy & Research is a consulting firm located in New York city and one that releases an annual check-up on the various credit card companies and their security efforts in place to protect consumers. The good news is there are a few credit card companies with impressive measures in place. The bad news is the report suggests they’re all lacking to some degree. Not only that, but adding those extra securities is as easy as “taking a few simple steps,” which has some asking, ‘why hasn’t it already been done?’. So which companies ranked best and what are those “simple steps”?

Using a range of numbers between 1 and 100, with 1 being the lowest rank and 100 being top ranked, the firm awarded Bank of America with 87 points, putting it at the top of the list. Last year, it was ranked number three coming in behind American Express and JPMorgan Chase. Coming in at number two this year is Discover. In recent months, Discover has made several changes to its consumer protection efforts and it’s clearly paid off. Last year had Discover at number six, a definite improvement.

Wells Fargo and CitiBank tied for the number 9 position. Last year, CitiBank claimed the number 4 spot and dropped five points this year while Wells Fargo came in at number 8 last year. Claiming the number 8 spot was HSBC, up one spot from last year’s number 9 ranking.

On average, the fraud totals for all top ten credit cards equates to around $37 billion.

The consulting firm says this is the single most effective thing your credit card company can do to protect you. Other recommendations include new policies prohibiting banks from asking you to verify your social security number. As one of the bigger card company’s spokesperson said, “We’re training our customers that it’s acceptable to give up their social security numbers over the phone. And it’s just not a good idea.”

It was also suggested that anytime a purchase is made online or over the telephone, the customer be contacted to verify the purchase is legitimate. A final recommendation includes limiting a customer’s online access to his account if his anti-virus software on his computer or mobile device is not current and up to date.

So what do you do if you want more specific information on your credit card carrier? Call it. Customer service representatives will be able to provide clearer guidance as well as answers as to what they’re doing to protect you.