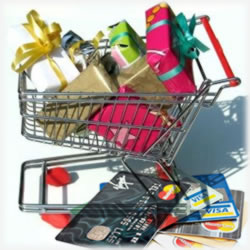 Aspiration Plus Spend & Save™

The status update on a close friend’s Facebook status made me want to immediately unfriend her: “Yay!! My Christmas shopping is FINISHED!” Yes. It’s September and she’s finished her holiday shopping. Most of us have only just begun to think about it, much less begun shopping (or in the case of Claire, actually finished it). So, of course, I picked up the phone and after she laughed at me for threatening to unfriend her, she agreed to let me in on her secrets. What I found out is I have quite the wise friend and one I’d definitely never “unfriend” on Facebook. Here’s what this single mom told me.

Now you know I’m not a rich girl. I have to start early or else I’d never be able to meet all those demands. I actually start my Christmas shopping a few months into the year. I always do.

When Divorce is a Factor

Honestly, I had no idea she saw holiday shopping as a year-round venture. As she continued with her story, it began to make sense, though. She is single and like millions of other divorced parents, she can’t rely on her ex-husband to do the right thing, including making his child support payments on time.

She went on to say she starts out buying for everyone except her two children early in the year. She knows her Mom will still love boots by the time Christmas rolls around, but she’s not so sure her six year old will still want the same “must have” in December that she wanted in March.

I always buy a couple of gifts the first few months of the year. That way, I can pay my credit card off – even if I have to break it up over two months.

She’s a stickler for credit card interest and she would rather “eat nails than pay interest” (her words, not mine). Laughing, she said,

Yeah, I love my MasterCard, but I sure don’t want to give the credit card company any more money than I have to.

She went on to say that by the time she’s paid that balance off, she keeps her eye out for other things for friends, her sisters and anyone else on her holiday shopping list. By the time September rolls around, she has no credit card debt because she’s diligently paid her credit card balances in full each month (or at least every other month). She can then concentrate on the little ones. By then, they’re pretty sure about what they want for Christmas, even if they haven’t mentioned the actual holiday – she knows the latest gadgets and kids fashions and other “kid related stuff” as she calls it. She said she wraps up her shopping at some point in September and then gives herself a couple of months to pay what she says are her biggest purchases off.

I asked her, “But Claire, where in the world do you keep all the loot you collect throughout the year?” She laughed again and reminded me she doesn’t have a big family or a big group of “best friends”. She did say, however, that she keeps everything organized in one closet so that she doesn’t forget a gift bought in March. “I hate buying a gift and then realizing as I’m pulling everything out of the closet that I’d bought a gift for that friend months ago and just forgot about it.” She says it’s all about priorities and keeping “my eye on the ball”.

Along with Claire’s great tips, here are a few more things to keep in mind as the rest of us unprepared souls head into the busy holiday shopping season:

Make a list! Claire uses an Excel spreadsheet and many financial counselors say it’s a powerful tool in budgeting as well as keeping tabs on where your money is actually going. You always know how much you’ve spent and how many more gifts you need to buy.

Focus on paying your credit card balances off as early as you can so that you’re not dragging debt into the next holiday season. Even if you can’t pay the entire balance off in January, make it a priority to have it paid off by March.

Organize your wrapping paper, ribbons and other supplies. If you think that sounds petty, consider this: Last year, I’d bought rolls of wrapping paper, ribbons, tape and all the trimmings. A week later, when I pulled all of my holiday decorations and supplies out of the closet, I realized I had enough wrapping paper left over to cover the next few years. It’s true I’ll eventually use what I bought last year, but the fact is, that was $75 I could have used for something else. Also – if you are shopping for wrapping paper, keep in mind there are huge discounts if you wait until December 26th. No reason why you can’t stock up for pennies on the dollar, right?

Are you the host for holiday meals and entertainment? If so, consider stocking up ahead of time. My mother is an incredible baker but it wasn’t until several years ago I learned she began baking in late October and froze the cakes. She sealed them tightly and protected them as though they were coming from Ft. Knox, but the bit of time spent a few weeks ahead of time ensured a beautiful presentation and spectacular food. All she had to do was pull her cake layers out, allow them to defrost and then ice them.

Flying to your niece’s for Christmas dinner? Check into your rewards miles. You may have a free flight waiting but you’ll never know if you don’t check with your credit card company. Also, if you fly every season to visit friends and family, you might want to consider changing credit cards to one that has great travel rewards points. You’d be surprised at how much you save just on your airline tickets.

If you’re thinking about vacation during the holidays, either book early or book your trip for the week after the holidays. You’ll find amazing savings at resorts around the world and most likely big discounts from airlines.

Finally, it’s important to not lose sight of what truly matters. As Claire explained,

The last thing I want to do is be stressed out as my kids are opening their Christmas gifts. I want it to be relaxed, carefree and I want us to be able to focus on the deeper meaning of what the holidays are truly about. If I’m not worried about paying for all of those gifts I’m a much better mom and definitely a lot more fun.