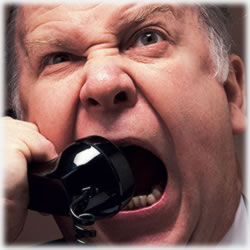 by Beth May, in: Finance News

The largest debt collector in the world was hit hard this week with a massive fine levied by the U.S. Federal Trade Commission. The $3.2 penalty was approved, provided the collection agency agreed to cease its harassments and abuse of debtors. The question is: will other debt collection agencies allow let Expert Global Solutions serve as an example?

This civil settlement is the largest ever obtained by the FTC against a debt collection agency.

A debt collection call is one no consumer wants to take. When those collectors cross the line and break the law, it can become more than just an inconvenience or embarrassment for consumers; in fact, it can be downright abusive. The stories are incredible and one wonders why it took so long for the government to rein this agency – the entire industry, for that matter – in.

Expert Global Solutions out of Compliance

The self proclaimed holding company for a “leading accounts receivable management company” encouraged (or at least didn’t prevent) its employees to disregard requests by consumers to not call them at work and even insisted the employees not take the word of a person on the other end of a phone call when told they had dialed the wrong number. Essentially, this company was harassing those who weren’t supposed to be targeted. Even when employees continued to call the right phone numbers and continued to be told that the debt wasn’t owed, the company would continue its harassment, even after the consumer provided definitive proof that there was no debt.

They called after being asked to stop; after they promised to stop; early in the morning; late at night; at people’s workplaces – when they knew the employers prohibited the calls,

said a consumer specialist who often works with the FTC.

As part of the settlement, Expert Global Solutions must also investigate the information it has if the debtor says the information is wrong or that the money isn’t owed. Further, the collection agency is barred from communicating with other companies about the debt. Any kind of harassment is barred and they must agree to follow the law as it was intended. Those requirements might be difficult to prove, though. The company must also record at least 75 percent of all collection calls and maintain them in a safe manner for ninety days.

So who are the ones turning these unethical debt collectors loose? You might be surprised to learn it’s the nation’s biggest banks. They’re using these financial outfits to collect their bad debt. While debt collectors have historically been aggressive, what’s unfolding now raises the bar in terms of a lack of professionalism and respect for the law.

Capital One, Macy’s and more are removing themselves from the retail/client equation and allowing these 3rd party debt collectors to recoup their money in any way they can. Most often, these efforts fly into the face of the Fair Debt Collection Practices Act.

The Consumer Financial Protection Bureau has stepped up to the plate. CFPB Director Richard Cordray is expected to testify on Wednesday at a hearing in Washington. He will ask for full authority to oversee the debt collection practices of banks and other financial entities. He will justify the request by citing the Dodd Frank Financial Overhaul law. This law makes it illegal to use aggressive collection tactics, including deceptive language either in writing or on the phone as well as abusive language. Cordray also knows that the robo signing scandal and sparse documentation collected by many banks’ mortgage divisions are still fresh on consumers’ minds.

It doesn’t matter who is collecting the debt – unfair, deceptive or abusive practices are illegal,

OCC as an Ally

Both the FTC and CFPB are about to get reinforcements, this time courtesy of the Office of the Comptroller of the Currency. It’s already investigating the nation’s biggest banks. Its goal is to uncover problems in their credit card collection tactics. Already, the agency has uncovered errors in about 10 percent of those files. It’s targeting the years between 2009 and 2011. Despite the massive fine levied against Expert Global Solutions, banks and credit card companies say it’s business as usual in terms of collecting delinquent accounts – with one exception: JPMorgan Chase.

The vast majority of consumers say they owe the money, explained Susan Shin, an attorney with the New Economy Project.

Those who filed the complaints are the ones struggling on so many levels. One man recalled being harassed four and five times a day. He has rapidly declining health due to an HIV diagnosis. Further complicating matters is the fact that he resides in a homeless shelter due to his own home going into foreclosure. Debt collectors began calling the shelter. Rogerio Normanilson believes the added stress is affecting his health. Macy’s was the original creditor, but it sold the debt to a collection agency in recent months. When Macy’s was contacted, a spokesperson would only say that Macy’s remains in compliance with the “regulations governing credit and collection activities.”

A year ago, government agencies were focusing on student loans, mortgages and credit cards. This year, the focus is on debt collection agencies. Because 95% of consumers won’t show up in court after being served a court summons, the collection agencies win by default. They can then use that ruling to garnish the debtor’s wages and many will attempt to freeze the bank accounts of those delinquent in their bills. Believe it or not, some are successful. Some states, including New York, keep the judgments current for twenty years. It also charges a 9% interest each month. This alone is disturbing since most of those delinquent in their bills are doing their best to pick up the pieces after the recession.

So what happens if you’re caught in what feels like a no-win situation? There are plenty of avenues available for consumers who fall behind in their payments. The first thing you should do is request a copy of your credit reports. Carefully research the report to ensure a judgment hasn’t interfered with your scores or that there are no mysterious accounts showing. Make a list of the credit card balances, car payments, homes, etc you’re obligated to pay. You can create an entire Excel workbook or a good old fashioned spiral bound notebook and pen. Putting it in black and white is empowering. Watching your budget provides a different perspective. Odds are, you’re going to be surprised at just how much money is unnecessarily being spent each month.

Finally, talk to the debt collector on the other end of the line. Negotiating lower balances or easy to maintain payment plans will eliminate those calls while also providing you the opportunity to repay the debt. Keep in mind, too, that if asked, your bank, credit card company or other creditor must cease from making any contact until after the debt has been verified – or not.

Have you ever been on the wrong end of a debt collector? Let us know what you think and whether the massive fine will be enough to finally rein in those predatory debt collectors.