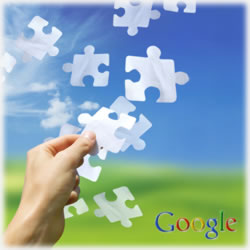 - Google AdWords
- The Financial Backing
- Bringing it All Together

Think those three dynamics aren’t likely to be used in the same sentence? It now appears Google is entering into the small business credit card sector and it’s doing so in a big way. Keep reading as we take a look at Google’s way of pushing its epic AdWords program by using its own credit card for small businesses.

AdWords, for those unfamiliar with the concept, is the powerhouse designed by Google that places a company’s advertisements on its search engine pages. The concept is that when certain keywords are used, it triggers an ad placement of those companies who specialize, offer, provide or educate the searcher. For instance, a search for “rose delivery” will result in any number of florists’ ads at the top and along the side of the page of the Google search results.

The problem for many small businesses, and certainly during the recession, was there just wasn’t enough money to justify a global advertising campaign, affordable though it was for that kind of exposure. With Google’s forethought, it now looks as though even the smallest of businesses can afford these campaigns with the use of its recently unveiled credit card, which is still in beta and considered in its “infancy”.

This new credit card for companies is backed by World Financial Capital Bank, which has long since been a heavy hitter in the world of credit. World Financial Capital Bank is headquartered in Columbus, Ohio and actually did quite well during the banking meltdown of three three years ago; it maintained its high ratings, including an A+ by the Better Business Bureau. It’s been around since 2003 and is a subsidiary of Alliance Data, which is located in Dallas, Texas. It’s considered a formidable presence in commercial credit card sector.

Bringing it All Together

The dynamics of Google, World Financial Capital Bank and credit cards come together in an impressive manner. Among the benefits, small businesses can determine when the best time is to advertise their offerings and then move forward, instead of waiting for profits to increase. Before, many small businesses around the nation could only advertise during those times of the year when valuable space was available at a lower rate.

Now, though, the Christmas and other holiday seasons are within reach, even if it’s not the strongest financial timeframe for a company. The credit card carries a 8.99% APR, which is considerably lower for many businesses, and certainly small businesses. There are no annual fees, either. It’s simple to use: simply pay for your Google AdWords with the credit card and then, once revenue increases, you begin making payments. Keep in mind, though, it’s not an open-ended timeframe. You’re still paying interest, even if it is an attractive rate.

Small businesses must also be aware that this credit card can only be used for Google AdWords. If there’s a downfall, this is it. Still, for a business that really wants to take advantage of the power of search engine advertising, it’s an ideal solution.

Also, and this is the key in this early stage: a business can’t apply for this card; not yet anyway. Because it’s in beta testing, the offer is being extended randomly to small businesses around the country. It’s also limited to the United States at this time. Google’s keeping mum on how it will determine its credit limits and will only say it’s determined by a number factors.

Also, there’s no word on how long it will remain in beta testing, though many in the credit card and financial industries say it’s not likely to drag on since it’s a great formula that has potential to be a big revenue maker not only for Google and World Financial Capital Bank, but the small businesses who opt to enroll.

Bottom line, it’s a solid formula and it looks as though Google has hit it out of the park, yet again. The impressive interest rate is one reason those in the know insist it’s a grand slam. For others, it’s all about taking advantage of those prime selling periods. After all, what water skiing company doesn’t want heavy advertising for those warm summer months when everyone is on the lakes and beaches? If the predictions come full circle, expect to see the Google credit card in mainstream credit circles before the end of the year.