How a Marble & a Wheel Can Cause Credit Card Debt 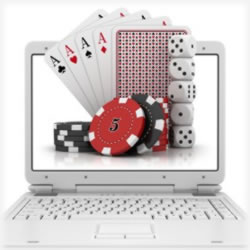 by Antonio Bard, in: Miscellaneous

Online gambling, when it comes to its controversial presence, is right up there with politics and religion. Most people feel strongly, whether it’s for or against, this activity that’s resulted in financial ruin, marriage breakups and a host of other problems. New Jersey became the latest state to allow legalized internet gambling. Its purpose is simple: increase tax revenues. This is the third state that’s opted for this as a source of revenue. Many are wondering, though, at what price will it come to consumers?

Many are concerned, probably justifiably so, about the potential for running up thousands of dollars in credit card debt and the chain reactions that always follow these types of fall from graces. To say there’s a potential for financial catastrophe is an understatement.

Even the state’s governor, Chris Christie, is concerned and it’s for that reason that he only agreed to sign it into law provided it expires in ten years. So now – online gaming is what many in the Garden state are doing as you read this. It’s also very likely Gambler’s Anonymous is preparing for what’s sure to become a new wave of people who have taken their online activities too far.

In order to participate in any kind of online betting, a credit card is required. A new account must be created where that credit card information is stored. There’s a reason why traditional casinos don’t allow gamblers to insert their credit or debit cards while on the casino floor: it’s too easy to lose control – and your cash. In an online setting, though, there’s no other way to conduct business. There’s no doubt the temptation will override the fear overwhelming credit card debt in some folks.

Lest we forget another reality: NJ residents who participate will pay higher taxes for the privilege of doing so.

Christie is convinced, however, that this presents a great opportunity to improve his state’s employment rosters and economic outlook. In fact, the benefits easily outnumber the concerns.

As mentioned, New Jersey is the third state to legalize this form of gambling, but even the two states that beat it to the punch are still waiting for the ink to dry on the law. Both Delaware and Nevada are now safe havens for those wishing to do a bit of gambling. This means, of course, it’s a new dynamic that no one is quite sure what to expect. Sure, there are international websites, but it’s against federal law to participate in any of those forums.

Analysts are more focused – and tome degree, concerned – about the potential for billions of dollars being pumped into states that allow digital casinos. It indeed would be a huge benefit for states that continue to struggle in a less than ideal economy. Ah – but those fears continue to grapple recovering addicts who are concerned about the Pandora’s box that’s about to be opened. Not only that, but there have yet to be any ideas on how the intricacies will work. Naturally, there are privacy and identity theft fears.

But online gambling is now poised to start drawing in millions of Americans in a potentially multi-billion dollar, digital gambling market. That alone is a risk, but fear-based risk is the potential for further damage in an economy that’s no stronger than an egg shell. If consumers/gamblers – even a portion of them – become hardcore gamblers and max out the credit cards, quite their jobs and lose their homes, it could spell big trouble for the economy. So strong is that potential that it, in some ways, offsets any benefits to individual states.

And then Forbes makes one substantial point: If online betting takes off in other states, a spike could be seen in overall U.S. credit card balances, which has steadily decreased since the peak of the financial crisis and housing meltdown in 2008.

There are certain safeguards being put into place, though they’re not likely to put to rest everyone’s fears. Casino executives say they have already defined final rules that will need to be required from the applicable enforcement agencies. One of those rules includes the states to require gamblers to appear in person at a casino in order to open an account. This will help ensure underage gamblers – to some extent – aren’t maxing out Mom’s Visa card. Still, it’s not a cure-all. Other rules include daily limits per casino, which, again will help – but some gamblers may have accounts at multiple casinos. Plus, you must be in the state you’re trying to gamble in. ISP addresses will likely ensure as much.

And there’s another problem – New Jersey’s population easily tops 9 million. Compared to the gambling capital of the nation, Nevada only has 3 million residents. Doesn’t take much to figure out the far reaching repercussions. Governor Christie acknowledges those truths as well,

This was a critical decision, and one that I did not make lightly,

Gov. Christie said in a statement.

But with the proper regulatory framework and safeguards that I insisted on including in the bill, I am confident that we are offering a responsible yet exciting option that will make Atlantic City more competitive while also bringing financial benefits to New Jersey as a whole.

Before this really began to take shape, Christie was quite vocal in his disapproval of online gambling. Historically, he’s vetoed any efforts to allow the bill to move forward. Many say he folded under pressure from other state leaders.

He was able to negotiate a requirement that requires companies to finance gambling addiction programs. Again, though, this is a great inclusion, but we can’t underestimate the financial problems it’s sure to bring. So many are still trying to dig themselves out from under credit card and other financial debt. There exists another logistics concern too: New Jersey was hard hit by Super Storm Sandy; these residents are already against the wall from a financial standpoint. It’s only been a few months and while progress is being made, it’s a slow dance.

From a historical aspect, online gambling, up until recent weeks, was a federal crime. It wasn’t until the Obama Administration began dropping hints that it wouldn’t be opposed to allowing states to decide whether or not it would allow its residents to participate in this activity. In fact, you can buy lottery tickets online these days, too.

There are faith-based considerations, as well. The Rev. Richard McGowan of Boston College has spent a considerable amount of time studying legalized gambling and specifically online gambling.

So what do you think about online gambling? Is New Jersey progressing or regressing and would you participate if you lived in one of the states that now allows it? Let us know your thoughts – remember – your state could be the next one deciding whether or not it’s going to be allowed.