Is Brown-Vitter Bill Good for Consumers or Banks? 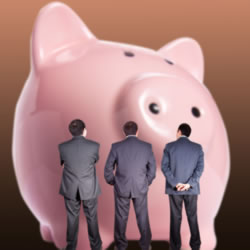 by Jon Dell, in: Finance News

Like most things coming out of Washington these days, there are two sides with the truth somewhere in the middle. Trying to gauge what’s next in terms of the way we handle our personal finances can feel like we’re trying to tie a billy goat to a fence post. The latest bill in the banking overhaul, like Dodd Frank, incorporates two senators for which the bill is named for: David Vitter and Sherrod Brown. The Brown Vitter bill was written so that banks would be required to set aside more capital to cover losses. As expected, the banks are fighting tooth and nail to avoid its passage and worse, they’ve rallied groups that really have no business arguing its merits or pitfalls.

Perhaps what’s most interesting in these efforts are the ones who say the nation’s biggest banks have successfully been able to not only delay Dodd Frank, but also avoid criminal investigations. These are the ones who say if Dodd Frank hasn’t been enforced, any other bill – and certainly one that further tightens the reins on the banks – doesn’t stand a chance. Despite the naysayers, this bi-partisan effort between Brown, who’s a Democrat and Vitter, who’s a Republican has some teeth in it, but it remains to be seen just how far it gets before other lawmakers attempt to discredit it.

The mindset is that had the bankers been forced to accept responsibility and had been doled out punishment – even of the criminal nature – the country would have seen a milder recession. Further, had Dodd Frank moved through without the opposition it received, the recession and still -brutal economy would have been little more than a blip for those who will write about it decades from now.

It should be noted that most folks’ money is on it not passing into law. Most folks are right. Even its authors say it’s a tough sale.

What Brown Vitter Does

The Brown-Vitter bill calls for the banks with more than $500 billion in assets to also have capital reserves of 15 percent of those assets. It’s significantly different from the laws that are in place now and you can bet the banks – including Citi, Bank of America, Wells Fargo and all of the other big players are working double time to ax this, much the way they did with Dodd Frank. Not surprisingly, part of their efforts include bringing to the table others with the same mindsets. Lawyers, some regulators, lobbyists – they’re all gathering to find ways to convince the American consumer of just how evil this new law would be. Not that law would directly affect consumers, mind you, but rather, if the banks are forced to fall into compliance that would hold them accountable, then they will most certainly be taking their frustrations out on the American consumer. They’re frustrated and you pay for that frustration via higher interest and fees.

It should also be noted that Standard and Poor is already warning of another financial meltdown and it’s also saying the fact that the banks, five years later, have yet to fall into line with laws passed those years ago. As a result, it’s going to cause big problems for the country yet again. Some estimates say that the big banks would be forced to raise up to $1 trillion. Even if those numbers are true, what’s not being told to the American people is the process as a whole. Even as the banks are bellyaching about not being able to raise that kind of money, the truth of the matter is, no one would force them to do so in one fell swoop; in fact, they would even be allowed to retain earnings, cease dividend payments and sell shares.

Banks, most likely, would voluntarily rein in their sizes so that they came in under the $500 billion mark, thereby requiring only 10% of equity. The opportunities for profit, of course, are still in place – regardless of what they’d have us believe. That’s a very short-sighted mindset and were these bank CEOs slow down long enough to realize it, they might discover that these are the very arguments Brown-Vitter would eliminate. The law would actually provide them with the kind of credibility most are sorely lacking.

Instead, they’re crying foul and say it’s little more than the government trying to shrink banks. And make no mistake, the banks and their many consultants are already on the defense. One journalist reports that a consultant with Hamilton Place Strategies, a D.C.-based policy and communications firm, has already begun bombarding members of the national media with emails that are written to encourage them to denounce the bill. It’s only a week old, too.

There does exist a threat to Dodd Frank, though. Brown-Vitter, for all intents, will tie regulators’ hands on whether they can pour taxpayer money into failing banks. Remember, Dodd-Frank has already given regulators resolution authority, which gives them the power to save failing institutions and impose losses on the shareholders and creditors. If Brown Vitter passes, it would eliminate Dodd Frank.

Unfortunately, a well respected financial executive says Brown Vitter will fail. Charlie Munger, Warren Buffett’s head lieutenant told CNN that in his opinion, the “too big to fail” banks are still entirely too complicated and even dangerous to the economy.

I think if you increase the capital requirements and let them do what they want, they will just get in trouble again,

says Munger. His efforts are focused more on a Volcker Rule type of solution. This was designed to limit trading opportunities for the banks. The fact that JPMorgan lost billions last year in these credit derivative hedge funds is proof that these new laws need to be put into place. “I think banks should be more heavily regulated,” said Munger.

We shouldn’t have vast derivatives books in banks with insured deposits.

Paul A. Volcker has also pointed out on numerous occasions that if JPMorgan Chase does ultimately crash, the next thing we’ll see is several of the other big banks follow suit, including Citi, Wells Fargo and Bank of America.

As mentioned, Brown-Vitter probably won’t get far in Congress. The reasons why many say it won’t isn’t based on any kind of truth and in fact, both Jesse Eisinger and Mark Whitehouse have gone so far to say that there’s no legitimate reasoning why it shouldn’t. There’s a lot to this bill and it even looks as though it won’t have the support of the Obama Administration, partly because Obama hasn’t been able to enforce Dodd Frank. Few dems are behind it, either.

If nothing else, it’s going to be an interesting thing to watch. One thing’s for sure, though – the arguments the big banks used for so long that they needed to be big to ensure stability is little more than a joke these days. Worse, few consumers trust the nation’s biggest banks anymore – and that’s not likely to change.

So what does all this mean for consumers and their finances? Directly, nothing – but if it does pass, the banks will be passing down heftier fees, higher credit card interest and loans will become more expensive as well.