Is Your Credit Keeping You Single? 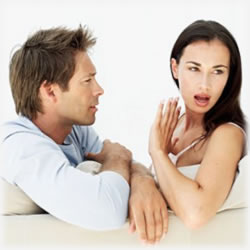 by Beth May, in: Bad Credit, Credit Score

We know that men and women see money and credit differently. We also know that men will take more financial risks than their female counterparts and women are better at saving – at least, on paper. But there’s a new trend emerging that’s beginning to shed light on how our financial decisions determine our romantic lives.

If you’ve ever allowed thoughts like these enter your mind, then odds are, you’re part of that trend –

My credit is tanked. Why would I want to meet someone, allow it to progress and then have to own up to my bad credit? That’s a level of rejection I can’t handle

There’s a shame factor attached to each of the five credit cards I’m trying to pay down. I don’t see myself even considering a serious relationship until I can get my debt under control.

What happens if I meet someone, it progresses and then we go into Target to pick up a few things and my check is declined because the computer is still showing that I have an NSF?

These are all very real sentiments of single people around the nation who fear having to shed light on the darkest areas of their lives. It’s true – we equate love and acceptance to how well we manage our finances. Whether or not it’s right is almost moot – it doesn’t change the hard truths that money plays a significant role in our decision making process.

What further complicates matters is regardless of what we’re told and the efforts of putting things in proper perspective, it’s a tough truth to get past. The fears are real because those three digit numbers that define our creditworthiness are real and maybe that’s where the problem comes in: that one little word: “creditworthiness”. You might as well call it “human-worthiness” because that’s the reality for a growing number of American consumers. It’s not limited to a certain demographic, either.

Women are less likely to see their bank balances as a score card than men, but women are also more likely to take their entire financial picture into consideration. One twenty-something woman, college educated, gainfully employed and self-supporting summed it up like this –

A few years ago, before I’d landed my job, I had a medical emergency that required me to go to the emergency room late one night. I was admitted overnight and I had no insurance. I used my credit card to cover the prescriptions that were required. I found a job a few months later, but by then, the debt collectors were already calling. I have two credit cards that were closed as a result of my consistently late payments and I still have debt collectors calling every day.

In the meantime, I met someone. I made the mistake of leaving him at the house while I made a quick trip to the store to pick up dinner. He answered the phone and of course, it was a debt collector. He didn’t mention it when I got back, but instead, I found where he’d taken the message down and left it next to the phone. The fact he didn’t mention it only embarrassed me more. Needless to say, we never went out again and I made up my mind that dating was on the back burner until I knew I could leave the house for twenty minutes and not fear my date answering the phone or plundering through my mail.

Credit Scores= Self Worth

Is it realistic? It is for anyone who’s ever been in this woman’s position. The truth is, though, our self worth shouldn’t be tied to our credit scores. After all, a lot of horrible people who have no business at all being in any kind of relationship often have credit scores in the high 700s. By the same token, some of the most loving and kind people who make solid contributions to their jobs, families and society might find themselves with credit scores that have tanked.

Until we’re able to dissociate our credit card debt as a measure of how much we can contribute to a marriage or relationship, most will continue to find themselves in a vicious cycle that includes anything but a healthy relationship.

Women equate money with security. When it’s a single woman, it becomes that much more of a security issue. After all, she has only herself to rely on, so it stands to reason she wants to be sure she can maintain her independence while taking care of her business, too.

Here’s the kicker, though – that old adage of opposites attract? It’s especially true when it comes to finances. Think about it – one spouse is usually always far more disciplined when it comes to budgeting. It usually sails right along, sometimes for year, until friction is introduced – and it always is at some point. It might be a matter of a husband or wife needing to be frivolous. If the couple can agree on just how much can be spent on a frivolous purchase, things move right along. If, however, one is a hard lined disciplinarian and doles out money only when it’s needed, it can be suffocating to the other spouse.

There’s a reason money is the biggest reason found in divorce papers – it’s a tough topic that brings up all of those uncomfortable facts about what money means to us and whether or not we can keep it in perspective. No one wants to own up to the fact that they’d rather clean skyscraper windows that balance their checkbooks – but the fact is, there are a lot of us who dread that monthly meeting with our bank statement. And God forbid we have to own up to a credit card charge that really wasn’t a necessity. So if we’re not being honest with ourselves, nothing changes. And therein lies the problem.

In other words – money is an important factor in the entire relationship realm. Those who are single might choose to remain that way until their money is better. If a couple is arguing over money, it’s usually because of the ‘opposites attract’ mentality. This is a tough break when we try to separate money from our self worth. The fact that society continues to hammer into the core of the human condition doesn’t help matters either.

Consider all of the television commercials. They all include families who are charging breakfast to their credit cards or taking vacations to far away places, complete with the celebrity of the week who are accompanying them. Then we have the bank CEOs whose egos are bigger than the banks they represent. Last week, one controversial CEO had the audacity to tell a member of the media that, “I have more money than you” as if his opinions and statements should be taken at face value because of his money and the number of credit cards he’s carrying.

Until we are able as a society to reduce that mindset that money equates to worth, we’re going to continue to leave a trail of broken relationships could have evolved into strong marriages were it not for the debt collectors, notices in the mail and lost sleep because there’s not enough money to cover the monthly expenses.