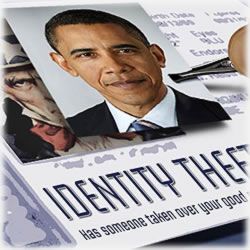 Not that it was too surprising, but after yesterday’s news that identity thieves had penetrated the financial records of both celebrities and politicians, we learn today that the first lady isn’t immune to being hacked either. A group – the same one that claimed responsibility for the hacks against Paris Hilton, Joe Biden, Kim Kardashian and even former first lady Hillary Clinton – is again claiming to have hacked into most of Michelle Obama’s financial accounts. And, just like yesterday, that personal and financial information was posted to another website – complete with social security numbers and other sensitive information.

The hackers managed to gain access to her Social Security number, credit reports from credit bureaus, addresses of where she resided over the years and her banking information. It’s not known if any of the president’s information was compromised. There are many theories floating around. One of those theories suggests one of the three major credit bureaus has been hacked into, mostly because of the type of information that was accessed. Others say it’s all a massive hoax, which doesn’t seem likely since the website exists and the information is listed.

Another reason why some say the bureaus have been compromised is because much of information is no longer relevant. For instance, three phone numbers claiming to belong to the first lady are no longer in service – which is information that could be found on a credit report. In fact, one phone number dates back to her time spent at the Chicago Medical Center, where Obama used to work. The second was disconnected and the third went to an answering machine.

Every federal law enforcement agency is investigating the leaks, though none of publicly commenting.

Yesterday, it was Vice President Joe Biden who was in the crosshairs. One of the phone numbers posted on the site had already been issued to another company in Wilmington, Delaware. The company owner, Tam Downs, says she’s been inundated with phone calls. She also verifies the legitimacy of the number in that in the past, phone calls from different media outlets were occasionally made to contact Biden.

Meanwhile, at least one of yesterday’s victims, Los Angeles Police Chief Charles Beck, has verified the information posted about him on the website. This was announced early Tuesday by a spokeswoman for the police department. Here’s what’s interesting: the law enforcement agency said it is not the first time he has had his personal information hacked and that the department is working with the FBI to track down the hackers.

What’s Being Done to Halt the Hackers?

The question on everyone’s mind now is what’s being done to rein in these hackers? The Pentagon is now creating teams – thirteen in total – that will be used to defend not only the celebrities and politicians, but each consumer, as well. Fears are these cyber attacks will continue to grow in both the level of sophistication and the volume. This is all being done within the Pentagon and all thirteen teams – which should be up and going over the next couple of years – will work with other law enforcement agencies to identify and halt these types of financial crimes.

Can we afford a plan that will take a few years to get up and moving? These types of hacks and attacks are growing at increasingly higher frequency. Whether it’s the denial of service attacks that kept the nation’s biggest banks trying to stay step ahead late last year or the breaches being made to the major credit card companies like Visa and MasterCard, there’s no denying that it’s an urgent crisis. The fact that security analysts were unable to crack the details with the denial of service attacks last year should be a call to action, especially considering the same group has emerged yet again. In fact, it began doling out those attacks today and already it’s hit one of the nation’s biggest banks and promises to make the rounds yet again.

It’s questionable as to whether these new teams – slated to be up and moving by late 2015 – will amount to much more than too little, too late. The collective goals of these teams, explained the FBI, will be part of a “broader government effort to shield the nation from destructive attacks that could harm Wall Street or knock out electric power”. Basically, what this boils down to is the hard truth that in this country, our security analysts and law enforcement communities rested on their laurels for far too long and now they’re scrambling to catch up. There’s been woefully little preparation, even as it’s become clear over the past several years that these issues would pose as a serious threat to the nation’s infrastructures. And if you’re wondering about how many efforts have been made to catch up, the fact that it’s going to take years to get this game plan in place should tell you all you need to know.

That’s just the tip of the iceberg, though. Because of an economy that’s not budged since the recession began, there are many budget cuts that could weaken the efforts and will most certainly undermine those government agencies. The fact that the vast majority of these hacks are coming from overseas means an international effort will have to simultaneously occur if any true progress is to be made. Another consideration that Congress will have to address is found in the judiciary arm. Legislation should already be moving through the system that would allow the private sector to share various computer threats with the government with no fears of a lawsuit. Those bills have not been written which will mean even further delays. A spokesperson for the National Security Agency testified in front of the Senate Armed Services Committee that the strategic threat picture continues to grow and has now become a crisis.

We’ve seen the attacks on Wall Street over the last six months grow significantly. Noting there were more than 160 disruptive attacks on banks in that period.

For those who followed his testimony, there was one particular statement he made that shows where we truly are in terms of better securing our financial structure and identities:

And if you look at industry, especially the anti-virus community and others, they believe it’s going to grow more in 2013. And there’s a lot that we need to do to prepare for this.

That tell-tale statement that there’s a lot we need to do to prepare suggests nothing’s been done to date. He then said that there are already a few teams investigating some of the more serious hacks. When asked, he would not identify what those hacks were. And, in true political form he shifted blame, citing congressional hiccups over budget considerations. If progress is to be made, the ability to recognize and halt major attacks on the financial industry is an absolute must; further, seeing them coming in real time must occur.

In the meantime, the government continues to believe the banks being targeted are retaliation for U.S. financial sanctions imposed to deter Iran from pursuing a nuclear weapons program. In many ways, the reasons are moot. What matters is as consumers, we are treading water with virtual targets on our backs.