Near Poor Americans: 30 Million and Counting 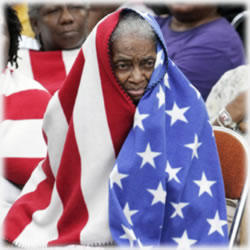 by Jon Dell, in: Finance News

A new report was released this week and the facts are startling. There are currently more than 30 million Americans who are living just above the poverty line. The near-poor is defined as having incomes of up to 1.5 times the poverty threshold.

They’re not quite there yet, but they’re knocking on the door and one minor financial crisis is all it takes to send them over the edge.

And if you think you know who they are, you might want to rethink that. Those who are “almost” there are white, elderly and they work full time. They also receive no government help.

People just above the poverty line are just one paycheck or health disaster away from poverty,

said Katherine Newman, a dean at Johns Hopkins University. “They are still quite fragile.” That number has increased 10% since the start of the recession as more of us began losing our tax brackets as well as our jobs and savings accounts. For those already in poverty, they now share that classification with a disturbing 25% increase of Americans now than in 2008.

According to the Census Bureau,

and one Johns Hopkins professor agrees. Robert Moffitt, professor of economics at Johns Hopkins also says they have “much higher rates of single motherhood”. On the other hand, he explains, whites in similar conditions are more likely to earn enough to at least keep them on this side of being in poverty – though barely.

Almost 17% of the near poor are elderly, while only 7.8% of those in poverty are white. It’s believed social security plays a role to some degree in keeping the elderly out of the actual poverty classification. Arloc Sherman, a senior researcher at the Center on Budget and Policy Priorities said,

Social Security is not an exorbitant program. People end up above the poverty line, but not necessarily far above it.

What is surprising, however, is that only some of those who are hovering near poverty qualify for any government assistance that would keep them safer. Many of these programs are income based. That’s not always true, though. The food stamps program, issued by USDA, is open to those who earn 130% of the poverty line. Meanwhile Medicaid and child care subsidies let some of the nearly poor enroll. It depends on the state, though. More than half – 57% – of those who are nearly in poverty apply for and receive any kind of public aid with one exception of school lunches. More than 70% of those in poverty have other government benefits, as well. Not only that, but the report says they are more likely to turn to their communities and churches for assistance.

The Poor and Credit

Now, there’s a dynamic that’s come up in years past, but is making its way back to prominence. There’s been a debate for years as to whether the poor pay more to use credit cards and there’s merit in those theories that they indeed pay more. It seems slightly far fetched, but once you begin looking at buying habits, APR fees, rewards programs and how credit actually differs among the more affluent and those who are at or near poverty levels, there does appear to be a pattern.

While it’s true that interest rates aren’t determined by a person’s income, but rather, his credit history, it’s a safe bet that whether someone with a 700 credit score and who earns $100,000 a year will pay as much in interest as someone who also has a 700 credit score, but who earns a third of what his wealthier counterpart earns. Here’s where it gets interesting, though. According to researchers at the Federal Reserve Bank, those who are struggling financially are also paying more for their credit than those with more financial wealth. Credit card rewards like frequent flier miles, cash-back programs and other marketing tools will benefit the rich much more so than the poor.

If it sounds unfair, it is. It’s legal, of course, and no merchant is deliberately making it hard for anyone to use credit cards nor are their actively punishing those who use cash; it’s just the way it is.

Now, with all of these dynamics, along with the startling numbers released this week on the poor and near poor, it’s little wonder no one seems to be getting ahead in their finances, despite the consistent political nonsense that says the economy has improved. Oh – and speaking of politics – remember, depending on who’s elected in two weeks determines whether the fiscal cliff kicks in on January 1. This could further complicate life in general for those already struggling to make ends meet.