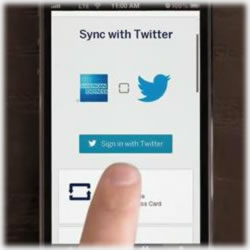 American Express has taken social networking to new heights with its Sync program. Twitter, Facebook and Foursquare are the sites it’s partnered with. And it’s great timing too, considering the sometimes unflattering spotlight the company’s faced in recent weeks.

Card members are given special pricing when they use different hashtags on their Twitter accounts. Amex gift cards, Xbox, Sony and Amazon products and gift cards are just a few of the options that are available. It’s being touted as a “seamless social commerce experience”.

Before you can begin using the hashtags and other opportunities, you first need to sync your American Express card on the Amex website. You’ll then authenticate your social networking log-ins and from there, you can begin taking advantage of the savings. American Express created the technology and it was first used for coupon-less savings to those card members who are synced with the app. Some days, users might find $25 gift cards on sale for $15 and other products are also available.

Based on the initial success of Amex Sync for offers, we know there is significant power in combining our assets with Twitter’s platform to bring value to Cardmembers and merchants,

There are a few things users need to keep in mind. First, corporate cards, prepaid cards -including Serve and BlueBird – along with some issuer cards are ineligible for the program, but any other valid U.S. American Express Consumer Card or Business Card from American Express OPEN can be synced.

It’s a great option for consumers who use Twitter as the process is simple and the rewards are many, including buying different products, accessing services online, taking advantage of special offers and a host of other options available only on the Twitter platform. Once you log onto the American Express site, you’ll have to provide details the first time, including billing addresses and other similar information.

Once you’re synced, you can find the products you want to purchase and then tweet the corresponding hash tag with your synced American Express card. At that point, you’ll want to check your Mentions tab in Twitter for your response from @amexsync. American Express sends with almost instantly, but certainly within fifteen minutes, you should have your response. You’ll need to then immediately confirm your purchase by replying to the tweet. Your products will then be shipped via two day shipping. It’s as simple as that.

Also, you can take advantage of as many special offers in one tweet as you choose, provided you use the right hashtag. You’re limited only by the 140 character Twitter limit. Also, keep in mind that if you receive a new replacement card for any reason, you’ll have to re-sync it. You will also need to unsync your first card, too.

Check the @AmericanExpress page for new offers added every day.

There’s an additional bonus for the credit card company if it’s successful. Every time one of the customers tweet, they’re basically providing free advertising for the company and helping to further establish the American Express brand.

The same process continues for those wishing to sync their Facebook accounts. From there, you’ll see special offers on your newsfeed that you can instantly take advantage of.

Initially, American Express reported a bit of confusion over the differences between “Add to Card” and “Redeem Online” with its Facebook app. The “Add to Card” offer enables consumers to receive a statement credit once you meet the spending criteria on your linked Card. You don’t have to present any coupons, either. The redeem online options allows you to take advantage of online deals.

While neither BlueBird or Serve, both of which are the prepaid products offered by American Express, are eligible, they’re still two rapidly growing financial products that really are changing the prepaid industry. Not only that, but American Express announced last week that it was in the process of evolving its BlueBird product to function more as a checking account. It’s going to mean FDIC insurance and while not a traditional account, it will allow millions of unbanked or underbanked consumers to finally have access to these important account types. Here’s a look at both –

By now, everyone has heard of the power duo that is Wal Mart and American Express. Even if it seemed like strange bedfellows initially, it’s clear the two mega brands have their formulas just right. As mentioned, the BlueBird is now FDIC insured and its draw is that it is an ideal solution for consumers all over.

Bluebird can be used anywhere American Express is accepted. It works much the way a traditional debit card does, except that it’s not linked to a checking account, but rather, transitions into a checking account. This prepaid product comes with no monthly usage fees, no fees for overdraft or annual fees and no minimum balance considerations. You may have to pay ATM fees, but it will be paid to the ATM owner.

Finally, members are given the option of direct deposit if it’s convenient for them and adding cash to their Amex prepaid card is easily accomplished, as well. The smartphone app is an additional bonus and allows users to transfer money between accounts.

Serve is also a new prepaid product being offered by Amex. It too has many benefits and has also become a popular option, even more so than similar cards that have been on the market for longer periods of time. The low fee structures, the recognizable American Express logo and branding and of course the safety features built into the entire family of Amex cards.

It’s not yet known if these two prepaid products will have the Sync options. Because of the growing number of Americans who are using these particular products, American Express would be wise to find a way to incorporate these consumers into its social networking efforts. It’s already proven it can strike gold – it just needs to find a way to ensure it translates well for the consumers served by Serve and BlueBird. It’s the largest credit card issuer – based on consumer spending – and American Express also has the lowest delinquency rates in the industry as a whole.

While it might be partly explained by its charge card dynamic, which requires payment in full each month, versus the revolving accounts its competitors offer, it’s clear the customers are loyal to their financial company. Unfortunately, just a few weeks ago, American Express announced it would be cutting more than 5,000 jobs before the year’s up. Its reasoning was simple: it wanted to reinvent itself and it also wanted to focus its marketing and technology budgets on mobile payments. If that’s the case, and judging by all of the new offers and features, it could be this is the credit card company to beat in the coming years. Time will tell, though, if it falls behind the competition or whether it changes course and becomes the card network to follow.

So what do you think? Would you (or do you) incorporate the social media opportunities offered by American Express?